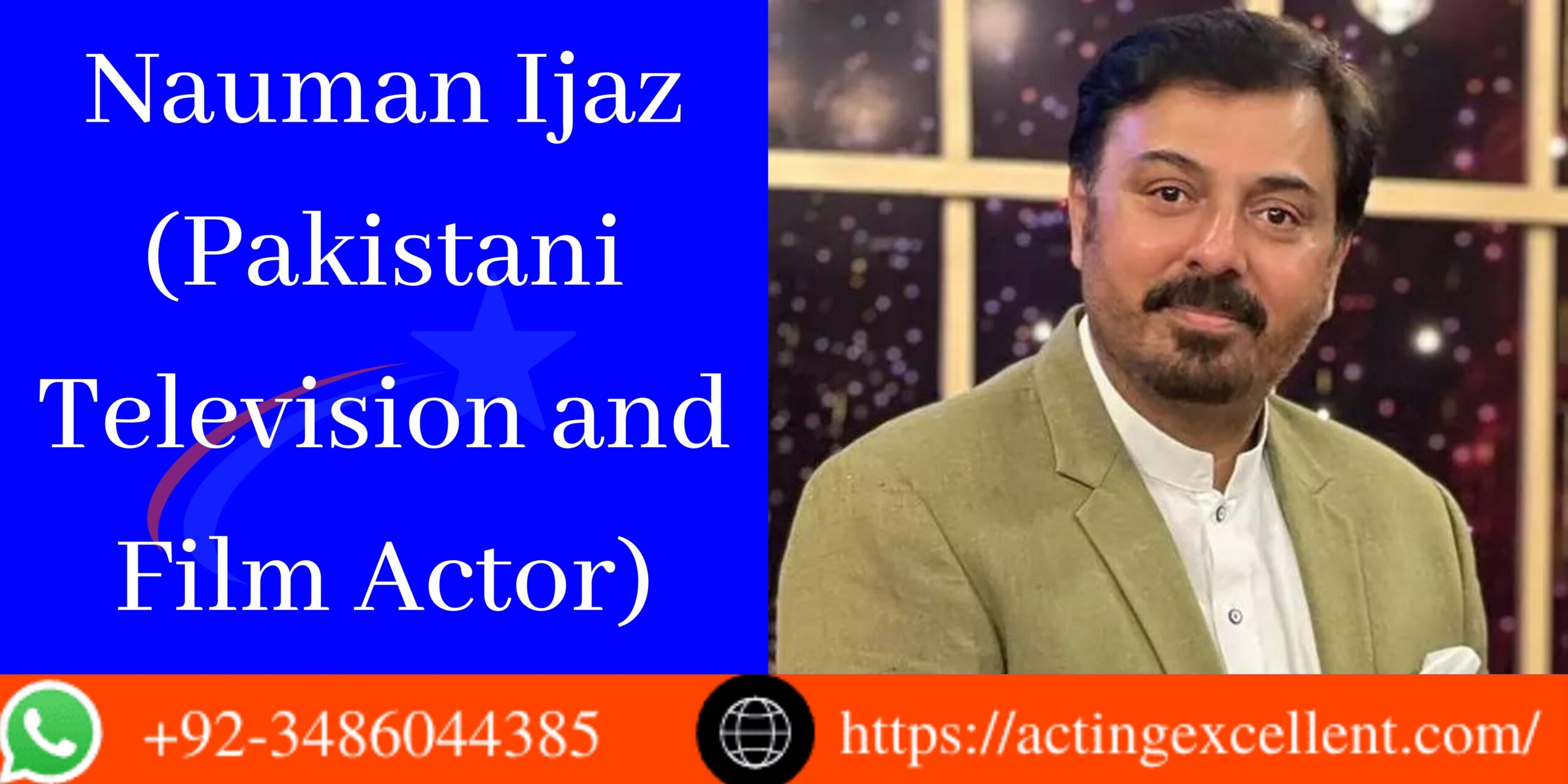 Nauman Ijaz is a senior Pakistan actor since 1988. Nauman Ijaz is not only a television and film actor but he is also a TV show anchor person and a TV show presenter. He was born on 14th February 1965 in Lahore, Punjab, Pakistan. He grew up in the Icchara town of Lahore.

Nauman Ijaz started his early education in the Cathedral High School, Lahore. Later he shifted to the Divisional Public School, Model Town, and Lahore. After schooling, he went to Forman Christian College to complete his education. He did an LLB degree from Punjab University. After completion of education, he started his career in 1988 in a drama serial.

His father was a theater manager and his mother is a housewife. Nauman Ijaz has only one brother named Awais Ijaz.

He was married to Rabia Numan and had three sons named as Zviyaar, Shahmeer, and Rayaan.

In 2008, Nauman Ijaz made his first-ever Urdu Pakistani film “Ramchand Pakistani”. This film was directed by Mehreen Jabbar and produced by Javed Jabbar.

In 2008, he also saw in a movie “Small Voices” based on actual events. It is also an Urdu Movie.

In 1990, he did his first-ever drama serial “Fishar” which aired on the PTV channel. It was a memorable drama written by Amjad Islam Amjad and was directed by Ayub Khawar.

In 1993, he played a great role as Mir Balaaj in “Dasht”. It was a classical hit drama serial written by Munnu Bhai aired on the NTM channel.

This was another drama serial in 1993, he acted as Huzoor Bakhsh aired on the PTV channel. It was a direction of Sahira Kazmi and written by Amjad Islam Amjad.

In 1994 he had done only one drama serial “Eendhan”. It was a blockbuster drama serial of the year for PTV. It was directed by Nusrat Thakur.

It was a superhit direction of Sultana Siddiqi in 1995, written by Naheed Sultana Akhtar.

It was a memorable drama serial of 2000 when he played a role as Sami Khan. It was written by Ali Rizvi and Haseena Moin for PTV.

In 2000, “Dunya” was aired on the PTV channel, written by Nusrat Thakur.

In 2001, this direction of Sultana Siddiqui was aired on the PTV channel.

In 2002, he played Jawad in “Nigah” written by Seema Ghazal. This was also aired on the PTV channel.

After a gap of one year, he worked in Sassi in 2004. Due to his acting in this drama serial, he was nominated for Lux Style Award for Best Actor.

In 2005, this direction of Tariq Meraj was aired on PTV.

This drama was released in 2006 and written by Wasi Shah. Due to this drama serial, he won the Best Actor category award in the Lux Style Awards.

In 2007, Nauman Ijaz had an acting debut in “Abhi Door Hay Kinara ” that aired on PTV.

In 2008, this drama was aired on PTV, written by Seema Ghazal.

In 2009, he played a role as Salar in “Noorpur Ki Rani”. It was directed by Haissam Hussain and aired on Hum TV.

In 2010, Nauman Ijaz was casted as Mehar Salar in “Main Mar Gai Shaukat Ali” serial. It was written by Khalil-ur-Rehman Qamar and aired in A-Plus.

In 2010, he debuted in the first ARY drama serial. “Mera Saaein” was a political drama.

In 2011, it was written by Seema Ghazal and also aired on ARY Digital.

In 2011, it was his first drama serial on Geo TV in which he was cast as Sayed Alim Shah.

In 2011, “Jal Pari” was released and aired on Geo TV. It was written by Sarmad Sehbai and directed by Sarmad Sulltana Khoosat.

In 2011, it was directed by Sarmad Sultana Khoosat for PTV.

In 2012, he debuted as Haider in this drama serial on Hum TV.

In 2012, Nauman Ijaz gave an episodic appearance in this drama on TV One.

In 2012, he was cast as Farman in a drama for Hum TV. It was written by Samira Fazal.

In 2013, he acted as Mian Ghulam Farid for Hum TV. It was directed by Kashif Nisar.

In 2013, he appeared in only 5 episodes of this serial of ARY Digital.

It was aired in ARY Digital in 2014, starring Nabeel.

In 2014, it was aired on Express Entertainment.

In 2014, this hit drama serial was aired on Geo TV. He acted as Zafar.

In 2016, he has done great success in the drama industry listed as:

In 2017, he worked as Aurengzed in this drama serial for A-Plus.

In 2017, he worked as Jawad for Hum TV. Due to this drama serial, he won the Best Actor award from Hum Awards and Lux Style Awards.

In 2018, this was the first-ever drama serial of Nauman Ijaz for BOL Entertainment.

After the gap of one year, in 2020, he was seen to play as Humayun Ahmed in “Dunk” for ARY Digital. This serial was based on false accusations of sexual harassment.

In 2021, this was the production of Kashf Foundation.

He was seen in 2021 as Maqsood in the direction of Kashif Nisar.

In 2021, he was seen in the super hit drama serial Parizaad on Hum TV. He was known as Behroz Kareem.

In 2021, he was seen only in flashbacks as Hidayetullah on Hum TV.

Career as a host

In 2014, he won the award for “Best Actor in a Negative Role” for Ullu Baraye Farokht Nahi.

Pride of Performance by the President of Pakistan

In 2019, he won three awards for Dar Si Jaati Hai Sila as “Best Actor Male Jury”, “Best Actor in a Negative Role”, and “Most Important Character”.