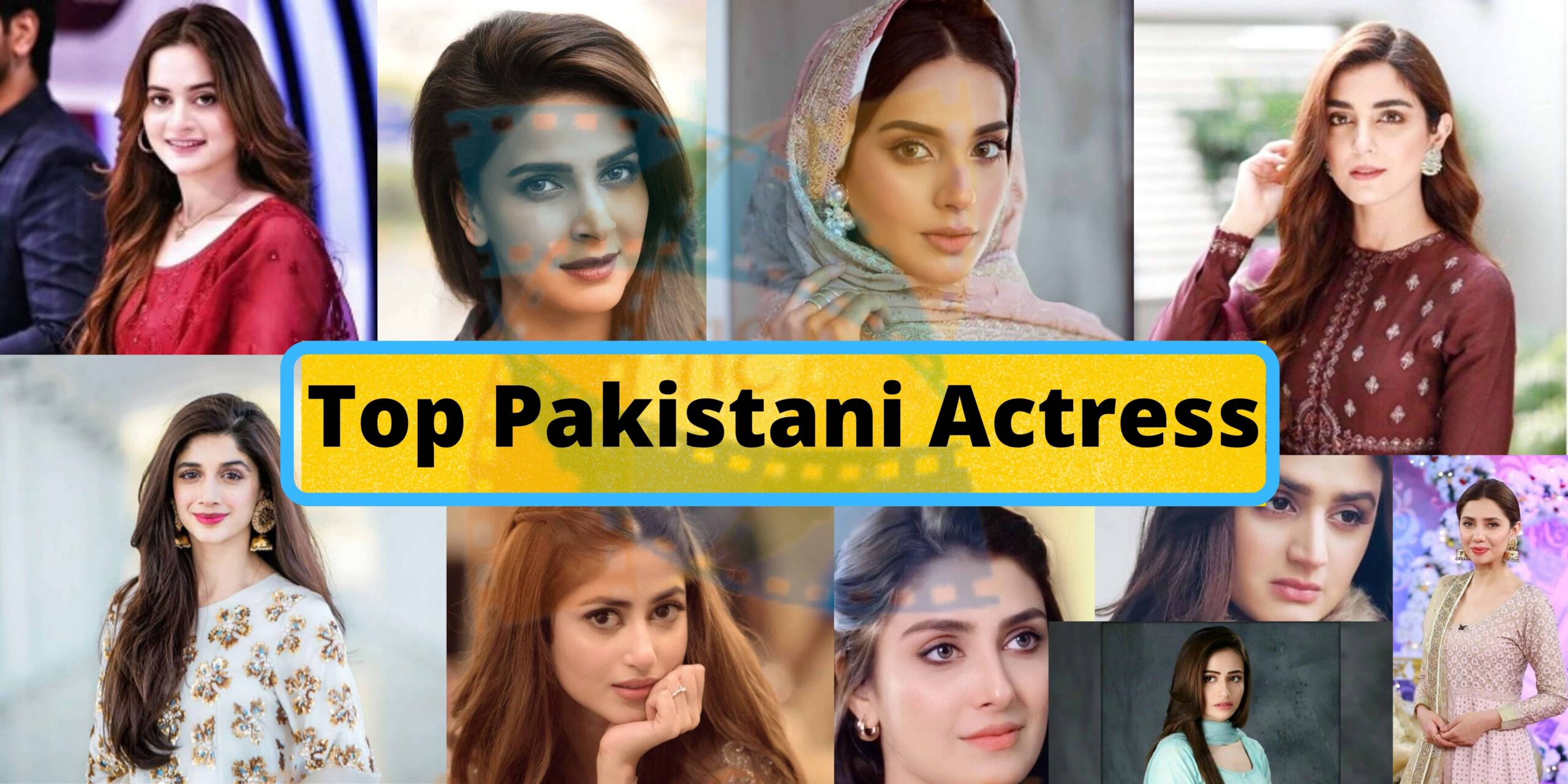 Due to their captive charm, they grab the attention of audiences all over the world. Pakistan is home to a large number of enticing faces from the entertainment sector. And, while every actress is stunning in her own right, some actresses have the audience enthralled by their enchanted beauty bubble.

Even no one can beat them. We can see their powerful beauty from their followers on social media.

When we talk about Top Pakistani Actress, celebrities, and well-known public personalities and their lifestyles, they want to check out their Instagram pages to see what they do in their daily lives arises. When celebrities share images, videos, and other pictorial stories, this social media platform is a significant tool for garnering fans and followers. Admirers no longer have to wait in line to meet and communicate with celebrities; instead, with this miraculous gadget, you can go live and interact directly with your fans.

Fans and corporations alike have stepped up to abandon old marketing techniques. Through social media, endorsing various products gets easy. Celebrities and well-known public personalities are approached by brands to endorse their products by posting on their social media profiles. Not just worldwide celebrities, but also Pakistani celebrities, were at the forefront of using Instagram to its full potential. Our Pakistani actresses, in particular, are enthralling millions of people and command a sizable fan base.

The top Pakistani actress is worthy to be listed in top lists due to their extraordinary acting skills and grateful features. No doubt many people especially girls appreciate Pakistani actresses and take them as their favorite personalities.

Pakistan has too many talented actresses with beauty. Here, we will discuss with you details of the top 10 Pakistani actresses and models. We suggest you should go to YouTube and watch them. We are sure you will enjoy their acting as well as modeling. Let’s have a look at Top Pakistani Actress!

The tall and seductive Without a question, Saba Qamar Zaman is the queen of showbiz. Saba first entered the showbiz world as a television actor, but now, in addition to being a prominent actress, she is also the face of big modeling firms. She is 37 years old (Born on 5 April 1984). Notable features of Saba Qamar are her slim and pointed nose, which sets her apart from the crowd, while her beautiful eyes add to Saba’s natural beauty. She is the top Pakistani actress.

She does a lot of struggle to be an actress, even in her one interview she told that her family was against her acting career because she belongs to the Sayyed family. The actress acquired notoriety after she called off her marriage plans with Azeem, a well-known blogger, and businessman. Saba had intended to marry Azeem Khan, a blogger, and businessman, but had to postpone the ceremony due to personal reasons.

Just days after announcing his commitment to Saba, Azeem Khan was accused of sexual assault by a woman. Saba Qamar is always targeted in media because of her bold dressing and charming personality. One interesting thing about this actress is she smokes.

Naina ki Sharafat is a new upcoming series of Saba Qabar. Its Urdu Flix series let’s have a look at its first teaser!

After the drama serial Maat, she is doing again the new drama Serial killer with umeraahmed. Besides her professional career, Saba Qamar has a beloved friend, she called her “Palethi ka bacha”. While watching the below video you can guess how close they are!

Mahira Khan has gone from VJ to Pakistan’s top superstar in a short period of time. She has represented Pakistan as a brand spokesperson for L’Oreal Paris in Pakistan and around the world. She also wowed millions with her flawless beauty in a black long gown at Cannes alongside India’s Sonam Kapoor and Aishwarya Rai. In 2019, Mahira Khan added another feather to her head when she was recognized for her contributions to the film business by the Distinctive International Arab Festivals Awards (DIAFA).

Mahira Khan is another one of those actors who wasn’t even very popular on Instagram a few years ago. She is one of the most popular Pakistani actors, and she does not put in a lot of effort to persuade people to follow her. She give two hit movies to film industries Bin Roy, (with Humayun Saeed) and Raees (with Shahrukh Khan).

Maya Ali is a well-known face in the entertainment industry. Rather, because of her seamless image, the actress has a large following of lovers and ardent devotees. The actress has captivating, big eyes, exquisite jaw and cheek lines, and a tall, slim physique, which makes her one of the most attractive and faultless Pakistani actresses in town.

Maya’s acting talent, in addition to her attractive features, contributes to her renowned position in the entertainment world. The actress has appeared in a slew of dramas and films, scoring some huge successes along the way. Maya’s critical triumphs include Man My ale, Diyaar e dil, Sanam, Parey Hut Love, and Teefa in Trouble.

When it concerns Sajal Aly’s acting abilities, we’re at a loss for words. She is the first and only natural-born actress Pakistan has produced. She is Top Pakistani actress and also she is ranked number 7 among Asia stars. She was out of contact with the TV industry for a long after her mother’s tragic death, but she made a strong comeback when she signed a movie called ‘MOM’ in India with late ‘Sridevi.’ That film was special to her since it reminded her of her mother.

When it comes to her incredible acting abilities, she’s a hard bird to capture or prey on. She is a strong and powerful icon of Pakistan due to the command of her acting skills. She is exceptionally attractive, delicate, and reserved in her demeanor. Ahad Raza Mir, an actor, is her husband. They’ve also recently shared screen time in a drama series. She is performing the leading role in hum tv hit drama serial “Ishq-e-Laa“.

Ayeza Khan is ranked higher in top Pakistani actress, her acting skills and her performance is outstanding. Ayeza Khan, the star of ‘Meray Pass Tum Ho,’ has surpassed 9.1 million views in a short period of time, and we are blown away. Despite the fact that Ayeza has never been a top actress for a long time, this ARY drama series has opened a lot of possibilities for her career path. She has been in numerous television dramas, including her most recent Mere Pas Tum ho, and Rom-Com drama, ‘Chupke Chupke.’

She maintains her ethereal style on her Instagram page, which has both western and eastern elements, to keep her admirers updated. Her Instagram page gets more vibrant and gorgeous as a celebrity pair as she publishes a couple of photos with Danish Taimoor and her adorable two children. She typically updates her page with information on her projects, both those she is presently working on and those she plans to work on in the future.

This cutie’s Instagram feed is a mix of family, work, and pleasure. Mawra Hocane has made a name for herself in the television and film industries, not only in Pakistan but also in Bollywood. After the success of her blockbuster drama ‘Sabaat,’ she gained a significant following. She has a reputation for speaking out against injustice and other social issues in her community. Her gorgeous ‘Selfies’ have made her a social media queen. UxM, her clothes company for young girls, was recently created in partnership with her sister actress ‘Urwa Hocane.’

Since the day she entered into the realm of television, Aiman Khan, the most followed Pakistani star on Instagram, has been the apple of everyone’s eyes. Despite the fact that the Ghar Titli ka par actress is little fat in real life, her innocent face and wide brilliant eyes contribute to her beauty, making her definitely one of Pakistan’s most stunning actresses. Aiman Khan was once obese, but she lost a significant amount of weight in order to pursue a career in show business.

Her profile was expanded with a more glamorous lifestyle after her marriage to Pakistani actor Muneeb Butt. Aiman Khan is a young star who has achieved the success that most stars can only be dreamed of, and he is quite near to Mahira Khan in terms of popular base.

Sana Javaid rose to prominence as the main lady in the megahit love saga Khaani, in which she played the leading lady. Sana’s light skin and naturally blushing face were a delectable sight for the audience, and the actress quickly rose to fame. Sana Javaid, who is youthful and gorgeous, is without a doubt one of Pakistan’s most beautiful actors right now.

Hira Mani thanked her Instagram followers for helping her reach five million followers. “Thank you for loving me and my Instagram,” the Mere Paas Tum Ho actress captioned a gorgeous shot. Hira also placed 5M and a love emoticon. Hira’s wonderful tweet won the hearts of her followers almost soon after she posted it. In the meantime, Hira Mani recently delighted her fans by presenting her song Sawaari as part of Kashmir Beats Season 1. The song gained over two million YouTube views within a week.

A newlywed and obviously three-time award winner and ‘Suno Chanda’ sensation had a fantastic 2019. She received accolades and married when Yasir Hussain kneeled and proposed to her in front of the Lux Style Awards crowd. So many good things happened in her life last year. In dramas, Iqra Aziz is noted for her bold, smart, and wicked character.

Her popular serials ‘Suno Chanda,’ ‘Ranjha Ranjha Kardi,’ and now ‘KHUDA AUR MOHABBAT’ have all demonstrated her acting abilities. People admired how Iqra and Yasir lavished their affection on each other and shared the news of their charming, uncomplicated wedding. Iqra Aziz’s Instagram following is steadily increasing.

Here is the Top Pakistani actress of the year 2021!