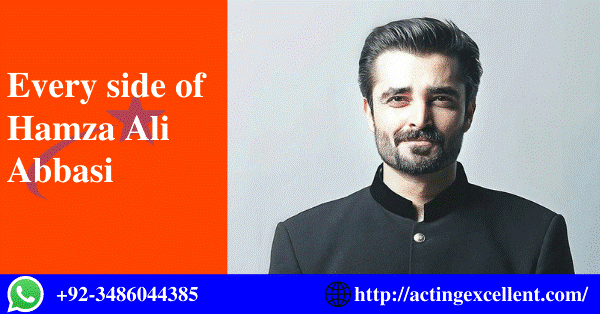 Are you interested to know about the handsome actor Hamza Ali abbasi? Do you know about his lifestyle, career, film industry, and politics? Yippee! You are in the exact place to expand your knowledge on everything that is in your mind.

All qualities of a good actor are full in Hamza Ali Abbasi which makes him a good actor, host, good filmmaker, and director. The purpose of his familiarity is based on some hit dramas, movies, theater performing serials, and awards. He is born in Multan on the 23rd of June 1984. His family member mostly relates to politics, like his father Mazhar Ali abbasi was a military officer while his mother Nasim Akhtar is a legislator. He has only one sister Fazeela Abbasi. Hamza Ali Abbasi’s age is 37 and their height is 5’ feet and 8 inches.

The alternative name of hamza ali abbasi is hamza abbasi.

His higher education from the United States, in which he completed his bachelor’s degree. While his master’s degree from the Quid-e-Azam university of Pakistan. Before going to the film or drama industry he passed the CSS test in good and higher competition.

There is a love affair with Saba Kamar. In one of her interviews, Saba Kamar tells the reason for not going to the wedding of hamza abbasi. Both of these are not admitted that about their affairs, but their picture is clear about their close relation.

Sadly! His marital status is not single, due to this many female fans are heartbroken. He is married to Naimal Khawar. Their family is complete with a baby boy Muhammad Mustafa Abbasi.

Other business of Hamza Ali Abbasi

Beyond the film and drama industry, his interest in theater dramas, which includes another business in Islamabad city of Pakistan.

In 2006, from theatre, various plays including Bombay Dreams, Home is Where Your Clothes Are and Phantom of the Opera, he started his career of acting. His net worth is 8 million with a salary two lack. In 2013 his film was released (waar), which makes him believe it is the start of his success. After this, he achieved film awards for best actors from his many hit movies.

He is a Tehreek-e-insaf supporter, and he was socially selected as a secretary in 2018. His political experience was not good due to some reason. He reveals Reham khan’s story by the script of a book named as beforehand. she is a journalist and wife of Imran khan. Due to this, she claimed Hamza Ali abbasi. When he solves the allegation, Khan claims that it is Reham Khan’s plan to have a fatal effect on him, as a result of his connection to Imran Khan.

The first movie of hamza Ali abbasi the glorious resolve released in 2011, in which his role was Tariq and it is the documentary file in the Pakistan industry. The main purpose of this movie is to understand the efforts of the Pakistan army against the threats of terrorism.

The next one is the mudhouse and the golden doll in which his role of Malang. He is a director in this movie. The main purpose of this movie is to understand the experience and know the real fact of life in producing movies.

In 2013 his next movie main hoon shahid Afridi was released, in which he plays the role of Maulvi Majeed. From the maulvi Majeed role, he achieved his first file award from ARY for the best star of debut male. The main character of the movie is a boy who has a sweet dream for making himself of future’s shahid afraid.

The next movie in 2013, is waar, in which he plays the role of Ehtisham, in which the main factures of this movie is the safety of the nation against terrorism, he also achieved a file award from ARY for the best supporting actor. It is the second award of his movie career.

In 2016 ho Ho mann jahaan was released in which his character role is a Malang baba. This movie aims to understand the friendship goal and shared their experience about music and expectation for familiarity in the field of life.

Shaan-e-Ishq was released in 2017, in which he plays the brother role of mehwish. Shaan-e-Ishq explains the sufinama and Sufi kalam.

Parwaaz hai Junoon was released in 2018, in which he plays the role of hamza. It is released on a special event of Pakistani Eid-ul-Adha. In this movie character, the efforts of an air force Pakistani girl journey with a tough time in her life after her boyfriend dies of Hamza Ali Abbasi.

In 2019 legend of Maula jatt was released in which he plays the role of Noori Natt. It is the best anticipated upcoming movie in the Pakistan film industry.

Hurrah! Kambakht is also an upcoming action movie, in which the main character explains the background of a middle-class man’s life efforts. It is an upcoming movie so no more info about this movie is explained here.

Hamza Ali abbasi is the best Pakistani male actor in the film or drama industry. His drama or television career includes the following latest dramas alif, pyarey Afzal, and Mann mayal. These are all dramas released or played on different Pakistani channels in which he plays a different role with various female actors.

Alif drama is the best top-ranking drama of his acting career with two female actors Sajal and Kubra khan. It is released or played on the Har Pal Geo channel.

The second most popular drama of Hamza Ali abbasi is Pyarey Afzal in which a female role plays by Ayeza khan. He falls in love with Ayeza khan but he can’t be able to purpose or express her feelings. It is released or played on ARY digital.

The next drama is mann mayal is also a superhit drama released on Hum TV channel, its story among two person’s love with a curious history.

Sadly, this drama ends with the death of Hamza Ali Abbasi. Alas! It was heartbreaking.

Hamza Ali Abbasi’s Instagram ID name is the realhamzaaliabbasi which has 806k followers and he follows only 3 people. His posts are mostly on the topic of Islam. For further information about Hamza Ali abbasi Instagram follow this link https://www.instagram.com/realhamzaaliabbasi/?hl=en.

On Facebook id, he has 3.8 million followers and he follows only three people. His Facebook id is Hamza Ali Abbasi which full of Islamic posts and videos which he posted related to the message of Islam. He shows a bundle of love with Islam and being a Muslim. For further information about his views on Islam click on the following link https://www.facebook.com/hamzaaliabbasi.

About more than one marriage, Hamza Ali Abbasi reviews

At the end of this blog, something discusses here hamza abbasi life journey. As we know about his life in showbiz and acting profession, his affairs and film industry. But now I am happy to know that his life decision according to Islamic point of view. His mostly conversion about on Islam and going to a good way or avoid to sin.

Ohh! He is not a Shia. But he said that he gives respect to the Irani nation and its rules and regulations.

What is Hamza Ali Abbasi going to do now?

He said that life is too short so he quit the acting profession and spent his life on the way of Islam.

What is the age of Hamza Ali Abbasi?

The age of Hamza ali abbasi is 37 year.

Who is the hamza ali abbasi sister?

Hamza ali abbasi sister is Fazeela abbasi. She is a dermatologist.

No, Naimal Khawar is the wife of Hamza Ali abbasi. She is proud to be the wife of hamza abbasi.