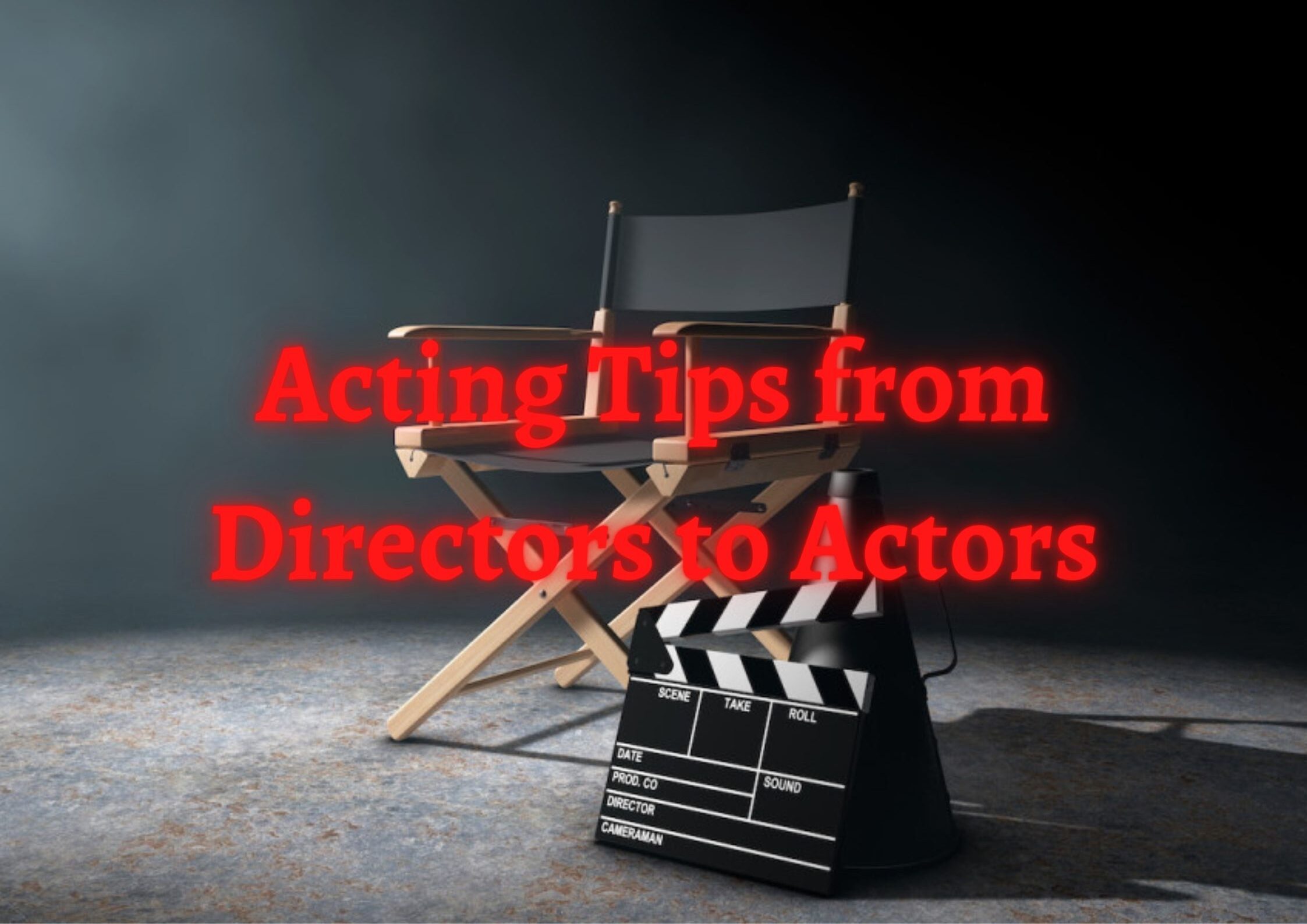 Do you want to know what are the Best 13 Acting Tips from Directors to Actors? Your cast is one of the most important aspects of any project. Your film or project’s cast can make or break it. However, many directors regard casting as the method of least resistance. There are a few things you can do to boost your chances of success by making the appropriate casting decisions. Here we will discuss some of our favorite acting tips from directors that every filmmaker should know about.

Why acting tips are necessary for struggling actors from directors?

Helpful advice, best acting tips, and inspiration from those who have made it are some of the things that motivate struggling actors to keep going. This has been the case for a long time. If you read or watch interviews with current A-list actors and directors, you’ll notice that they look up to actors 20-40 years their senior for acting advice. They continue to inspire the next generation, and you’ll probably have your own quote on the AZ Quotes website one day.

This page contains some of the best acting tips we could discover from those who have made it in the professional actors, directors, and other entertainers on both the craft and acting as a vocation. These brilliant diamonds, which have come from the mouths of equally great actors, can inspire you to keep going when things get tough. Let’s have a look at the best acting tips from directors.

Connection between the actor and the play

Meryl Streep explains what acting is and gives method actors advice on how to find a connection between themselves and the character they’re portraying.

Acting isn’t about impersonating someone else. It’s about discovering the resemblance in what appears to be dissimilar, and then finding myself there.

Michael Shurtleff, author of simply (Audition), one of the best books on auditioning, discusses the necessity of understanding that an actor’s role is to make a tale intelligible to the audience.

Every scenario you’ll ever act starts in the middle, and it’s up to you as the actor to fill in the gaps. Creating relationships is the heart of acting. It is essential. It is basic.

Working with directors, according to James Franco (an American actor). If I give a decent performance, I give the director at least 50% of the credit. He is the best actor of Hollywood and has performed leading role in many movies.

Johnny Depp (actor, producer, and musician) is unconcerned about choosing parts that may not turn out well. If it works, that’s fantastic. I tried but it didn’t work. Just keep moving forward and give a shit about what anybody thinks. Do what you have to do, for yourself. You can follow him on Instagram for more acting tips: https://www.instagram.com/johnnydepp/?hl=en

Choose acting if you are capable to do

Paul McGann claims that only those who are incapable of being persuaded from acting should do so. That’s practically the minimum requirement. Films are artifice.

We are telling stories in films. At the same time, when it works, there’s a real tough immediacy and spontaneity to it and a punch.

Harriet Walter on the importance of treating your co-workers with respect, both for their own benefit and for your own. Treat directors (and authors) as if they are guilty until proven otherwise.

Must understand the personal toll

On the importance of knowing the human toll that theatre school or acting can have on you, Samuel West says:

Acting is not a form of therapy. At heart, this job is about continuing to make great theatre for the people of Sheffield, a city I have known and loved since childhood.

Emma Stone and Eddie Redmayne discussed the differences between performing in live theatre and film in an interview with the New York Times, with Stone remarking that while transferring from film to stage, an acting instructor advised her to exhibit “Teaspoons, not buckets.” This is sound advice on bestiality and voice for actors straddling the screen-to-stage divide.

According to the medium platform, another key piece of advice concerns an actor’s function in the picture as a whole. If the director asks you to do something you don’t agree with, you have the right to ask why or provide an alternative. A skilled director will assist in the discovery of possibilities in order to make their actors’ choices more natural and straightforward. However, there might not always be an alternative. Let’s imagine I create a shot’s blocking in a certain way as well as an actor doesn’t want to do. They might inquire if the blockage can be adjusted.

Let’s imagine that in this case, modifying the blocking of that one shot has a knock-on impact on the next three shots and affects how the parts will be edited. Assume we’ve already taken those other shots. There is no other option in that situation. We have a complete sequence that relies on that specific blocking in that one shot to make sense.

Getting no notes is a good note

According to the medium platform, a director may frequently give notes to an actor after a take about the previous take and how to approach the next take. Occasionally, however, the director will say nothing to an actor in between takes. Many performers have told me that this is one of the most terrifying aspects of their jobs. Isn’t it true that everyone enjoys a pat on the back? The truth is that the director is preoccupied with the camera, lighting, and other aspects of the production, as well as the performers.

Because the director is concentrating on other aspects of the take, if the director likes what an actor is doing, he or she may not take the time to say “excellent work.” A director doesn’t want to waste time on something that isn’t broken because there is only so much time in the day and time is money on a film set. If a director does not give an actor a note after a take, it means the director enjoyed what the actor did on that particular take. Directors obviously attempt to pat actors on the back and tell them they’re doing a good job, but this isn’t always possible.

There is no need to be self-conscious because if a director doesn’t like what an actor is doing, they will ALWAYS say something. They’ll be sure to tell the actor if they don’t like something.

Get out of your own head

Hill was nominated for an Academy Award for Best Supporting Actor in 2014 as a result of his performance. Scorsese is an unbelievable director” story? So, when we were shooting Wolf of Wall Street the scene I auditioned with, the first scene, I auditioned with was Donny’s intro scene, where he goes up to Leo at the diner and says like, how much money do you make?” and all that stuff, and “I wanna work for you,” you know?

“I know how to do this scene. So, that day all we were shooting in the diner was that scene, and the scene after, where I call and quit, and Leo’s doing voice-over saying like, “This guy was really weird.” You know, like, whatever.

So we get there, we shoot the intro scene, and it goes, we do like a few takes and Scorsese’s happy and he’s like, you know: “Cool. Moving on.” Right? I’m so relieved. Like all, I’ve been thinking about was this scene. I’m so relieved. Then we have to shoot the scene that’s not even really scripted. It’s just literally like:

He’s just like, well obviously we know something’s not working, or else we would have moved on ages ago, right? So finally I’m like… we take, as I walk around, get a cup of water, and his assistant is a friend of mine, comes up and is like: “You okay? You alright?” And then I’m like, sweating… it’s a disaster because if she notices, she’s at the monitors.

Oh my God, like, he must be not happy with what I’m doing. Right? And so we do it like 10 more times nothing. I don’t know what it was, but he just was like, basically, his way of getting me to get out of my head and chill out. I had high hopes for that question, but you exceeded those hopes.

Explore the background of character

Sofia Coppola developed a name for herself as a writer and director who knows a thing or two about building unique characters, thanks to her part as Mary Corleone in The Godfather Part III. Coppola discusses the importance of character backgrounds in her current film, The Beguiled, in this Q & A at the Angelika Film Center (2017).

I was more interested actually in the motivations of Edwina and Martha’s characters I thought that everything in the movie that the two of them went through it was very understandable to me the way that they handled the situation and I was just wondering as a director with that kind of motivations do you leave that up to the actors or do is that something that you would have discussed with them oh thank you and yeah we talked about their characters in kind of their background Kirsten and did their own preparation to make it connect with them personally.

So, I know Nicole I didn’t want to care about the story so melodramatic I didn’t want to turn campy. I wanted it to be you know fun and funny but also excited about something real and I remember the coal just when she starts playing that part she saw that characters really protecting these girls and she was in charge of these girls has been left behind a very maternal.

I think it made her human how she’s conflicted and Kirsten also she’s conflicted between being a good example and a kind person but then he’s an enemy. He should be there so um so we talked about the situation in the character’s background and then they you know worked on their own later to connect with them thank you.

Same version for yourself to do

Jimmy Fallon offers more general advice on realizing that not everyone sees oneself in the same light as you do. “There’ll always be someone out there… who doubts you, believes your head is too big or thinks you’re not smart enough. But, those are the individuals you must ignore, and those are the times when you must simply continue doing what you enjoy.

Here is a summary of Acting Tips from Directors!

Hope so you learn the basic acting tips from Directors, for better acting read our blog https://actingexcellent.com/top-10-voice-acting-tips-for-beginners/